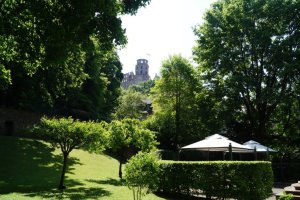 Law Professor Dr Anja Seibert-Fohr, internationally renowned expert in public international law and human rights and Vice Chair of the United Nations Human Rights Committee, is joining the ranks of Heidelberg University. She has been appointed to the Hengstberger Foundation Professorship for contemporary studies of the rule of law at the Heidelberg Faculty of Law. Prof. Seibert-Fohr will serve as Director of the Institute for Constitutional Law, Constitutional Theory and Philosophy of Law. The newly created professorship in the field of public law is financed by the Hengstberger Foundation.

Heidelberg University President Prof. Dr Bernhard Eitel praised the special commitment of sponsor Dr Klaus-Georg Hengstberger, who has long enjoyed close ties with Rupert Carola. "The donation will allow the Faculty of Law to expand an important field of legal studies as well as strengthen the internationalisation of research and teaching," states Prof. Eitel. The donation from the Hengstberger Foundation is earmarked for setting up and hiring for the new professorship, which will become a permanent position at the Faculty of Law. The establishment of the endowed professorship in law grew out of Dr Hengstberger's personal ties to the University; he studied at the Heidelberg Faculty of Law and also earned his doctorate here. "I am pleased to be able to support the research work and course offerings in this extremely relevant field," says the donor.

After completing her law degree and successfully passing her second state examinations in law, Anja Seibert-Fohr pursued her Masters studies in international and comparative law at George Washington University in the United States, where she received her doctorate in 2004. She conducted research at the Max Planck Institute for Comparative Public Law and International Law in Heidelberg, and as part of the Minerva Programme to promote outstanding female researchers, she directed a research group on judicial independence. She worked closely with the Organization for Security and Cooperation in Europe (OSCE) in order to advance rule-of-law initiatives in the Eastern participating states. After completing her habilitation in Heidelberg, Anja Seibert-Fohr was a professor of public law, international law and human rights at the University of Göttingen and served as Director of its Institute for International and European Law.

Her research at Heidelberg University will consider contemporary and future aspects of the rule of law. "Ongoing globalisation poses new challenges to the rule of law.. Transnational threats are emerging that can be countered effectively only in cooperation with other states. My research as well as holding international conferences will contribute to developing strategies to permanently safeguard our commitment to the rule of law from such threats," emphasises Prof. Seibert-Fohr.

Through his foundation established in 1997, Dr Hengstberger has supported a number of different academic projects as well has a joint Research Training Group in law at the universities of Heidelberg and Cracow. Since 2004, the Hengstberger Foundation has awarded annual prizes to outstanding young researchers and research teams to fund their own international symposia. For his service to Ruperto Carola, Dr Hengstberger was named an honorary senator of Heidelberg University in 2003.